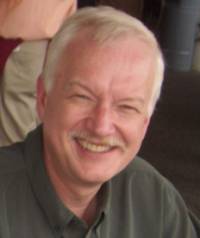 Dear Friends I took this picture at St Thomas Mount in Chennai India a few years ago. The carving is about ten feet high!   The Apostle Thomas spent much of his ministry in India and there are still  many'St. Thomas Christians"  there.   Thomas worked many miracles. The story I was told by the locals  is that Thomas' last miracle was an encounter with some Hindu priests throwing water in the air worshipping their gods. He asked why the water came back down, and said the real God would receive the water. They said to show them and he offered water to Jesus and it went into the sky. The priests were angry and ran him through with a spear.  This site of Thomas death is now a shrine and this carving is there. NEWS  Our radio station is under way and sounding GREAT!   We had an open house with live music on Saturday April 23. It was a great success.   Since we are a non commercial station we need the support of believers!  Please pray if you can helps us each month. Blessings Terry Somerville www.totalchange.org Subscribe To The Newsletter

Listen to our new internet station.

I was sent this article by a friend. It is a very interesting look at the passover blood on the doorposts.

Craig Hill pastor of Family Foundations International.    I have found that there are several profound principles and practices in the Bible that we, as westerners, totally miss simply because the eastern imagery is unfamiliar to us.  One such practice, the understanding of which is a key that opens profound new insight into the Bible, is a particular type of blood covenant known as the "Threshold Covenant".   In the ancient East, when a host became aware that a guest was to call on him, if he wished to receive and honor that guest, he would pour out a sacrifice of blood at the threshold of his dwelling.  The sight of this blood sacrifice was then taken by the guest to be an invitation to pass over, or step across the blood-stained threshold and enter into a covenant of hospitality with the host.  Since the blood on the threshold represents the life of the host, the greatest insult a guest could convey would be to step on the threshold, and thus in the blood (Hebrews 10: 26-29).   Blood Covenants Covenants in the East have for centuries been ratified by the outpouring of blood.  While blood in the western mind is usually thought to represent death, the the eastern mind, blood represents life, God told the Hebrew people in Leviticus 17:11 "For the life of the flesh is in the blood, and I have given it to you upon the altar to make atonement for your souls".   So the blood poured out on the threshold was representative of the life of the host.  This greeting customs was, and still is in many parts of the Middle East today, commonly known and practiced.   The costliness of the blood was indicative of the dgree of honor to be conveyed to the guest.  If the guest was to be lightly esteemed, the blood of a dove or pigeon might be offered.  If he was to be honored more highly, then perhaps the blood of a goat or an ox may be used.  If the guest was a king, then the blood of a very special animal called "the fatted calf" reserved for a king, would be used.   So, when an invited guest crossed the threshold of the host's home, he was agreeing to come in peace and to support, bless and honor that host while in his home.  No honorable man would cross the threshold of a host's home with an intent to rob, kill, or do the host harm.  The host, on the other hand, by receiving the guest, was obligated to defend, protect and provide for the guest while in his home.  To an eastern mind, how strong is that covenant of hospitality?  So strong that a host would even protect a stranger who has passed over, or covenant-crossed his threshold, to the same degree that he would protect one of his own family members.   Abiding Under the Shadow: We find recorded in Genesis 19:1-11 the account of Lot receiving into this home as guests two angels, whom he believed to be strangers on a journey.  The wicked men of the city came that evening to Lot's home and demanded that he grant them access to the two strangers that they might homosexually rape them.  Lot, as a covenant host, responded that he would not give them up, but rather would protect these guests to even a greater degree than he would protect his own virgin daughters, because, he states, "they have come under the shadow of my roof" Genesis 19: 6-8.   This phrase "to come under one's shadow," is very interesting.  It is a Hebrew idiom denoting the covenant commitment of a host to protect one who has covenant-crossed the threshold with all available resources, even unto the death of the host.  Without threshold covenant understanding, Lot's response makes no sense to us as westerners.  However, this insight opens up for us the incredible statment God is making to us in Psalm 91: 1-2 when we are told, "He who dwells in the secret place of the Most High, shall abide UNDER THE SHADOW OF THE ALMIGHTY."  God is stating here that, to the same degree Lot was willing to protect those who had passed over this threshold, with all available resources, God is willing to do the same for all who have covenant-crossed His threshold where the blood of the Messiah is poured out.   Undestanding Passover: Let's now look at how this custom of threshold covenenat applies to the Passover.  In ancient times, it was common practice for a king to travel throughout his land securing the loyalty of his subjects and ridding the land of his enemies.  Usually, the king would travel with a large entourage of diplomatic emissaries, his harem, and his army.  In each village, either he, personally, or one of his diplomats would pass over (covenant-cross) the threshold of the homes of each loyal family, enter in that home in peace, and delcare the terms of the kingdom.  However, wherever the king found a disloyal family who refused his sovereignty over them, he would not pass over the threshold of that house, but rather would send the army in and rid that home of his enemies.  How would the king tell which families were loyal to him and which were not?  The primary indicator was the blood poured out at the threshold of the house, inviting him in.   This understanidng of the historic, eastern threshold covenant greeting custom and its apllication to the visit of a king is critical in understanding the events surrounding the Hebrew Passover recorded in Exodus 12.  I believe that this event has been taught, by many Jewish and Christian teachers, in the opposite manner from the way in which it actually happened.

"And you shall take a bunch of hyssop, dip it in the blood that is in the basin, and strike the lintel and the two doorposts with the blood that is in the basin (threshold very bottom of the doorway).  And none of you shall go out of the door of his house until morning.  For the Lord will pass through (abar) to strike the Egyptians; and when He sees the blood on the lintel and on the two doorposts, the Lord will pass over (pasakh) the door and not allow the destroyer to come into your houses to strike you" Exodus 12: 22-23.

In looking at the Hebrew verbs used in this passage (abar and pasakh), it became evident to me that the way I had looked at this event all of my life was exactly the opposite of the way it actually happened.  I had alwasy been taught that the Passover event had to do with the blood of the lamb being placed on the door of the house to ward God off and make sure that He didn't come into the house.  The concept was more of God being a wrathfull killer, Whom you want to ensure will not come into your house.   The actual event was just the opposite.  God told Israel that when He saw the blood on the lintel and doorposts of their homes, He would pass over (Covenant-Cross)(pasakh) that door.  In other words, He would come into that house and not allow the army (destroyer angel of death, that He had released to destroy the Egyptians) to come in to harm them.  He would rather instead send the destroyer (army) into the houses of the disloyal enemies who did not place the blood of the lamb on the lintel and doorposts of their houses to welcome the conquering King.

an observation: When we look at the lintel and door posts.  It creates a Chet, the 8th letter of the Hebrew aleph-beit. which means life.  So the angel of death would have seen the the LIFE (God made manifest throught the Blood of Jeshus, King of King and Lord of Lords) was a guest.  And the angel would know the Blood of the creator and not harm the occupants.  WOW.
added by editor

While this threshold covenant greeting custom would have been very familiar to the Israelites of that time, it is very foreign and unfamiliar to most of us as modern westerners.  Consequently, many of us have misinterpreted the purpose of the blood of the lamb in Passover.  Which picture of God more describes the relationship you have embraced with Him?  Do you perceive God as someone to invite into your home, or someone to ward off and keep out of your home?   Once we understand the eastern concept of threshold covenant ant the Jewish Passover, we are now prepared to understand the New Covenant made by the blood of Messiah Yeshua (Jeremiah 31: 31-34).   Yeshua came to give up His life and pour out His blood at the threshold of His Father's eternal dwelling.  In the New Covenant, God Almighty reverses the roles form the Hebrew Passover.  He now says,  "I wish to treat you as a king, and to invite you to step across the threshold where the most precious blood in the universe is poured out.  This is not the blood of a goat, a bullock or even "the fatted calf."  This is My own blood poured out through Messiah Yeshua."  When we step across this threshold, we enter into a blood covenant with Him, thus obtaining His authority and benefits including eternal life, healing and protection.   Article by Craig Hill  Family Foundations International, in Littleton, Colorado.