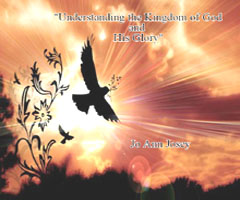 THIS HARVEST IS FOR NOW - AND YOU ARE PART OF IT

Read Rebanna's vision:  "I had a vision tonight of an eagle made of wheat,  very ripe wheat heads. In perfect order. I’m not sure what this means. Maybe America is ripe and ready to be picked. (Rebenna Williams)

When I ( Kathie Walters)   read Rebecca's vision - it made me realize that so many people are distratced by political issues - and Covid 19 and masks (it's a 'no' from me). We are aware of all the great words about the harvest. With all the mess going on- I do believe that America is ripe for harvest.  We CAN'T be distracted  lf the harvest is ripe, and.to be gathered.

A lot of Christians have a hard time with witnessing. I think through fear of rejection  or other forms of fear. Or just having a wrong concept about evangelism.

Quite a few churches believe that the evangelist comes once or twice a year, and they have outreach meetings, and you try, and bring some unsaved people, hoping they will give their lives to Jesus.  But you know, that's not what the Bible says about evangelism. Jesus told people to" Go and tell.".

The Evangelist is a gift to the church - one of the five fold ministry gifts- "Apostle, Prophet, Evangelist, Pastor,Teacher. They are for the equipping of the saints- for the work of the ministry..The evangelist is meant to encourage the church, and teach them how to win souls, he is not meant do  it for you-

Just last week- through my Elijah list article, and my Youtube video on the dumb spirit, hundreds of people got delivered from a spirit that silenced them.

Your words have power- they are seeds that can burst into life in someone else. So the enemy wants to shut you up - wants you to be quiet - don't speak- let someone else do it,

No my  friend it is YOU - It is interesting that when the Holy Spirit fell on the early church - there was fire -salvations - miracles - but the move was spread, not by the Apostles,  but by the people. Acts 8   After the death of Stephen the church was swept with a fierce wave of  persecution,  and the believers were scattered ( except for the Apostles) through the regions of Judea and Samaria. V4 "The believers who were scattered went everywhere preaching the good news  Another word included in "preaching" is gossipping- So the believers gossiped the gospel wherever they. went. Guess what happened? People were saved, Phillip preached, and a revival broke out. Revivals are spread through people talking and ministering - often one on one.

The revival we were in in London was an amazing out-pouring of the glory - but it was spread through people and children. Children lit up the schools -and hundreds of kids were saved..

The famous Hebrides revival where the Presence of God just came down on the island- was spread by the people, They told me that people were in and out of each others houses -telling about Jesus, and what He was doing,It is an amazing story - I wrote a book about it. " Bright and Shining  Revival." Eye witness accounts I got myself from the people. Incidentally there are some things going around about the revival that are just not true- we all like to believe romantic things-but the real facts are even more exciting. The famous praying sisters were not related to President Trump's mother -and they did not send her their Bible. It is true there was a great move of God, and they prayed, and also recieved the revival BY FAITH. When God said He would visit them - they believed it and declared it, and didn't pray for  it anymore.

Everything we receieve in the Spirit relam, we recieve by faith  - including revival. So we believe when He says it, not when we see it.

THE HARVEST IS RIPE - God wants to use you --- don't say," Its not my calling, I'm not the evangelist type." That's a cop out -We are all supposed to declare the works of the Lord. Declare His goodness. "Do not be afraid, but go on speaking, and do not be silent and I will be with you.." Acts 18,

"I am not ashamed of the gospel of Christ, for it is the POWER of God unto salvation"..Rom 1  --

If you have a problem speaking out- watch my video on you tube "You may have a dumb spirit:."

There's nothing like spirit led fishing for souls  --I am not talking about knocking on doors and accosting people in the street - but there are people around you all the time --it's not always telling someone the whole gospel  message from  beginning to end,  it's just doing what the Holy Spirit tells you to do.

I met a guy in Australia - he was gayer than gay. He was terrified of me, becaue he knew I was a Christian (and a preacher at that), and many gay people already believe that God hates them, because they have met such hostility from Christians. I knew God wanted to reach him -- I let him and talk and talk, and laughed at his  jokes--

I saw in a vision, the President steering a huge ship "the U.S.S Constitution" (never boarded by the enemy) and there was a great wall of water. ready to crash down on the ship - good water - it was glistenng - but it was stationary,  like waiting to be released.  Well it's going to move when we move- it will confirm the word which WE will speak,

Stop waiting for the guy at the front - there are times for the man or woman  at the front - to teach- but when the Body comes together, my Bible says, " Everyone of you has a tongue, interpretation, prophesy, song, word..

Make a committment with yourself to NOT be silent -  In the spirit realm, the seed is in your Mouth - when it comes out of your mouth under the anointing- it has power to bring life or healing - or birth something.

In the olden days they rang a bell to get attention and make an announcement- well you are the bell - you are the one to make a sound. You aren't  called to be a wall-flower sitting in the corner unnoticed.

William Booth, founder of the Salvation Army was accused of making a spectacle of himself, he said, " Young man, If by standing on my head outside the pub, and playing my trumpet I could get  some attention and win some souls, I would surely do it."  Evangeline Booth, his daughter, rode througfh the streets on Toronto on a white horse, and wearing a long red wig - but at the first meeting that night she had 900 people,

Don't be shy = you have a spirit of boldness. Boldness doesn't mean you have to be aggressive - just not self consciouse.  You can't be God conscouse, and self consiouse at the same time.