Brock Bronson and the Russian Attack on Goliad 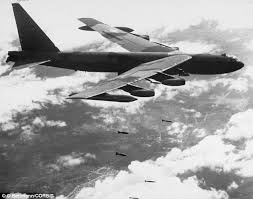 One day when I was just a small lad growing up at 125 N. Goliad Street in Amarillo, Texas, Brock Bronson scared the bejabbers out of me. Until that moment, I’d never even seen a bejabber. Maybe you’ve never laid eyes on one, either. You don’t want to, let me tell you.

Hmm. Until recently, I hadn’t thought of that guy in years.

Brock Bronson. Now there’s a name that means business. Especially if it’s attached to a teenaged bully sort of guy. Especially if you’ve barely broken into double digits age-wise yourself. Especially if the teenaged Bronson lives just three doors down the street from you. (I’ve changed the name to protect the guilty—and to keep the innocent from being sued—but it was exactly that kind of name.)

I barely remember Brock, His Teenaged Highness, ever lowering himself to speak a word to me, which may have made the words he spoke on that fateful day all the scarier.

In his defense (which is crazy—a guy named Brock Bronson doesn’t need any defense), he may not have been that much of a bully. He may have been just a pretty normal teenage boy which meant then, just like it probably does now, that he had a higher opinion than the facts would support regarding his own intelligence, invincibility, immortality, and skill behind the wheel of an automobile. Maybe his parents didn’t share those views, but I will testify, the pre-teen boys on his block were pretty sure that teenage guys like Brock were either one notch below deity or in very close contact with the Devil. Either way, they were not to be trifled with.

Which might explain to some extent why my little brother and I believed him when Brock and his companions (I don’t remember if he had companions, but this is the kind of brainstorm teenage boys usually have in pairs) roared to a brief stop in front of our house, stopped my little brother and me in our innocent tracks as we were riding bikes or trikes on our sloping driveway, and informed us that a Russian attack had been launched against these United States in general and Goliad Street in particular. He led us to believe that we didn’t have time enough even to run inside the house but that if we’d crawl way in under the juniper bushes that bracketed our driveway, maybe the Russians wouldn’t see us, and we might have some slim hope of survival.

I suppose we thought Brock was headed to the Front. All we knew for sure was that he was headed away. Jim and I ended up way under a big juniper waiting for Soviet bombers to appear. I don’t know how long we waited, but it seemed like hours, and, later, it seemed like days before I quit itching. (Have you tried crawling around under junipers recently?)

I suppose we were waiting for Brock to stop by and give the “All Clear.” It never came. Neither did he. But neither did the Russians or their bombers.

Ah, worrying about a Russian attack on Goliad Street was world-class dumb. But I hate to think how much time I’ve wasted in the years since then worrying about stuff which, from Heaven’s point of view, must be even dumber. Worry. Anxiety. It’s dumb and dumber.

Faith. Now that’s where wisdom comes in. On Goliad Street or anywhere else.

Copyright 2014 by Curtis K. Shelburne. Permission to copy without altering text or for monetary gain is hereby granted subject to inclusion of this copyright notice.