The Official Breaking Of The Covenant With God

9 So it was, after they had carried it away, that the hand of the Lord was against the city with a very great destruction; and He struck the men of the city, both small and great, and tumors broke out on them. 10 Therefore they sent the ark of God to Ekron. So it was, as the ark of God came to Ekron, that the Ekronites cried out, saying, “They have brought the ark of the God of Israel to us, to kill us and our people!”

11 So they sent and gathered together all the lords of the Philistines, and said, “Send away the ark of the God of Israel, and let it go back to its own place, so that it does not kill us and our people.” For there was a deadly destruction throughout all the city; the hand of God was very heavy there. 12 And the men who did not die were stricken with the tumors, and the cry of the city went up to heaven.
Pray Church Pray
Yahweh Hear Our Cries
Take Down The Temples Of Baal


The Temple Of Baal Coming To New York

Will Be Followed By

Hundreds More All Over The World

The reproductions of the 50 foot arch that stood at the Temple of Baal in Palmyra, Syria that will be erected in New York City and London next month will only be the first of many.  As you will see below, it turns out that there are plans to put arches in hundreds more cities all over the globe.
The organization behind this is the Institute of Digital Archaeology, which is a joint venture between Harvard University, the University of Oxford and Dubai’s Museum of the Future.  The initial arches from the Temple of Baal that will be erected in New York and London as part of UNESCO’s World Heritage Week in April are intended “as a gesture of defiance“, but ultimately the plan is to share this “cultural treasure” with as many cities around the planet as possible. 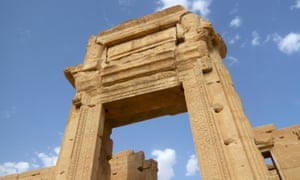 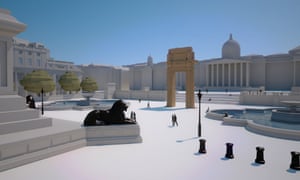 Model of how the arch will look in Trafalgar Square. Photograph: Institute for Digital Archaeology
The life-size model of the original 2,000-year-old structure, known as the Arch of the Temple of Bel, will stand approximately 48 feet high and 23 feet wide.
It will be one of two constructed in China for exhibition likely in Times Square and London’s Trafalgar Square as part of a World Heritage Week event in April 2016, said Roger Michel, executive director for the Institute for Digital Archaeology.
I suppose that it is appropriate that these giant arches are going to be made in China, because it seems like almost everyone is being made over there these days.
But these are not the only two giant arches that are going to be made.
That same article from the New York Post says that the Institute for Digital Archaeology ultimately hopes to put 1,000 of these arches in cities all over the globe…
http://nypost.com/2015/12/29/3-d-printing-to-bring-syrian-arch-destroyed-by-isis-back-to-life/

The institute plans to construct approximately
1,000
such versions of the arch in cities throughout the world.

If you are anything like me, this is an extremely disturbing development.  Baal worship is definitely not something that we should be celebrating as a society.  There were very good reasons why the God of the Bible found it so incredibly repulsive.  The following description of what went on during Baal worship comes from Scott Brown…

Scott Brown:  "We know that there were usually lots of people gathered, often on a high hill (like a theatre or stadium) to observe public sex, just like we see in movies and television and on the internet (Numbers 22:41, I Kings 12:25-33). We think that our watching these things is different than the idolatry of old, but this is not so.
The whole community came out and all of the best pagan ideas for success in crops and fertility were promoted, just like a business seminar that promotes unbiblical ideas that justify the worldliness of its origin.
The wicked personalities (promoters and performers) were respected and given the platform (like rock stars and Hollywood’s “People’.) Some of them were great dancers (like Brittany Spears and Madonna) while others were great musicians (like Mick Jagger and Paul McCartney) (I Kings 15:12-14). In our day, people who go to our churches celebrate celebrities when they should be doing the opposite. Psalm 101:1, 3 says “I will walk in my house… I will set no wicked thing before my eyes…”
People danced around the Asherah pole, which was nothing more than a phallic symbol. It is quite possible that these poles functioned somewhat like the poles in what are called, “gentlemen’s clubs.” The people also acted out lustful, licentious, bawdy scenes for the enjoyment of all who came (Isaiah 57:5-8; Deuteronomy 23:17).They had all the different kinds of sexual experiences on display including men with women, men with men and all of the combinations that are popular today in sit-coms, movies and news reports. On top of that, they invited the crowd to participate (I Kings 14:24).

In addition to everything that you just read, child sacrifice was a central feature of Baal worship.  This is what Jeremiah 10:4-6 says…

4 Because they have forsaken me, and have estranged this place, and have burned incense in it unto other gods, whom neither they nor their fathers have known, nor the kings of Judah, and have filled this place with the blood of innocents;
5 They have built also the high places of Baal, to burn their sons with fire for burnt offerings unto Baal, which I commanded not, nor spake it, neither came it into my mind:
6 Therefore, behold, the days come, saith the Lord, that this place shall no more be called Tophet, nor The valley of the son of Hinnom, but The valley of slaughter.

We like to think that we are so much more advanced than people back then, but are we really?
Just like ancient Baal worshippers, we are a society that is addicted to watching other people have sex.  In fact, it has been estimated that 68 percent of all Christian men watch pornography on a regular basis.
And just like ancient Baal worshippers, we are a society that is engaged in child sacrifice.  We call it “abortion”, but the motives are still the same.  If an unplanned or unwanted pregnancy comes along, we have a mechanism “for getting rid of it” just like they did.
Since Roe v. Wade was decided in 1973, we have slaughtered more than 58 million of our own children.  I would venture to say that the ancient Baal worshippers never got quite that much blood on their own hands.
On one level, I find it quite ironic that a reproduction of part of the Temple of Baal is going up in Times Square.  David Wilkerson once preached a message entitled “Tearing Down The Altars Of Baal” at Times Square Church, and now a monument to Baal is actually being erected in Times Square.
In our next video, my wife and I will be covering all of this.  When it is published, you will be able to find it on our YouTube channel.  And don’t forget to hit the red subscribe button on the right hand side of our YouTube page.  https://www.youtube.com/watch?v=iRs95RioiS0
Many people regard America as modern day Babylon, and now we are going to have a monument that directly links us to ancient Babylon right in the heart of our most important city.
To me, this is one of the most important news stories of 2016 so far."
Source: End of the American Dream
http://themostimportantnews.com/archives/april-2016-the-temple-of-baal-will-be-erected-in-times-square-in-new-york-city
I was stirred at this part of Scott's message on his site:
Anyone who questioned the activity ended up on the wrong side of public opinion, like Elijah. Ahab summarized the attitude people had toward Elijah:
"Is that you, O troubler of Israel?"
And he answered,
"I have not troubled Israel, but you and your father's house have, in that you have forsaken the commandments of the Lord..." I Kings 18:17
**************************************************************************************************************

The Temple Of Baal In Times Square In April

Next month, the Temple of Baal will come to Times Square. Reproductions of the 50-foot arch that formed the temple’s entrance are to be installed in New York and in London, a tribute to the 2,000-year-old structure that the Islamic State destroyed last year in the Syrian town of Palmyra.

Next month, the Temple of Baal will come to Times Square. Reproductions of the 50-foot arch that formed the temple’s entrance are to be installed in New York and in London, a tribute to the 2,000-year-old structure that the Islamic State destroyed last year in the Syrian town of Palmyra. The group’s rampage through Palmyra, a city that reached its peak in the second and third century A.D., enraged the world, spurring scholars and conservationists into action. Numerous nongovernmental organizations are now cataloging and mapping damaged cultural heritage sites in the region – from the New York Times

Remember last August when the image of the Hindu Goddess of Death, Kali,
Was put on the side of the Empire State building?
In the Bible, Baal was the reigning false god worshipped in the pagan cities of Canaan and Phoenicia. The name ‘baal’ appears 63 times in 51 verses in the King James Bible. Before the Hebrews entered the Promised Land, the Lord God warned against worshiping Canaan’s gods (Deuteronomy 6:14-15), but Israel turned to idolatry anyway. During the reign of Ahab and Jezebel, at the height of Baal worship in Israel, God directly confronted the paganism through His prophet Elijah. In Matthew 12:27, Jesus calls Satan “Beelzebub,” linking the devil to Baal-Zebub, a Philistine deity (2 Kings 1:2). The Baalim of the Old Testament were nothing more than demons masquerading as gods, and all idolatry is ultimately devil-worship (1 Corinthians 10:20).
America is not the Babylon from the Bible, but certainly many attributes of our society resemble pagan Babylon. We live in a society that glorifies homosexuality, pornography, drunkenness, and we kill more of our unborn citizens by performing over 3,000 abortions per day every day in the United States. We have twice elected a Marxist president who is the antithesis of Christian values, a man who has done more to turn America towards true paganism than any other president we have ever elected.
Bringing the Temple of Baal to New York City is quite fitting. In 2016, we have become a nation that does not want God, does not want His Book, and most importantly has locked His Son Jesus Christ outside the doors of the professing Christian church. We have become greedy, selfie-centered, powerless wanderers, not realizing that the judgement of God has already fallen down upon us.
“For when they shall say, Peace and safety; then sudden destruction cometh upon them, as travail upon a woman with child; and they shall not escape.” 1 Thessalonians 5:3 (KJV)
Many are saying that recreating the Temple of Baal in New York and London will ‘open a portal‘ to sinister forces, and that the planets will be aligned in such a way during that time as to portend dark things. Now I don’t know about that, I guess we will just have to wait and see what happens but I do know this. For the last 8 years as a nation we have begged God to leave us alone and to remove Himself from our affairs.
He has.