In watching the news and listening to the candidates who are vying to be our next President we are seeing a lot of different personalities & characteristics revealed, all of which are definitely different and extremely unique in being boisterous, raw, refined, quiet, politically correct, professional and more.

Is one characteristic better than another? Or should we look for something else?

Recently in the Monday Night Forum, we talked about David and Solomon and their differences, which might be something to ponder.

In I Kings Chapter 5:1 it is written:

5 Hiram king of Tyre sent his servants to Solomon; for he had heard that they had anointed him king in the place of his father, and Hiram had always loved David. 2 Solomon sent to Hiram, saying, 3 “You know that David my father could not build a house for the name of Yahweh his God because of the wars which were around him on every side, until Yahweh put his enemies under the soles of his feet.

This scripture says David could not build the temple, because he was a man of war, but why was he a man of war?  Didn't God call him as King over Israel to fight?

Yahweh promised Israel a lot of land, but the leaders before David had not been able to get it all. When David became King, he set his heart to get "everything" God had promised and he went after it with passion and vigor.

David worshiped Yahweh and sought Him for direction before he ever went into battle. He knew he needed God with him and so it was, for David warred and took possession of all the things God promised Israel.

Question? If God was with David through all this, why did He tell David, "Thou shalt not build an house for my name, because thou hast been a man of war, and hast shed blood?  (I Chronicles 28:3)

Was Yahweh punishing David? No, He was revealing David's ministry. David was a man of war, that was his gift.

Men of War remove that which has been built up falsely, but it is Men of Peace God builds with.

One other thing, Solomon built the temple and in I Kings 8:16-17 when he dedicated the temple he spoke these words on behalf of Yahweh.

16 ‘Since the day that I brought My people Israel out of Egypt, I have chosen no city from any tribe of Israel in which to build a house, that My name might be there; but I chose David to be over My people Israel.’ 17 Now it was in the heart of my father David to build a temple[a] for the name of the Lord God of Israel.

Do you see it?

Since I brought Israel out of Egypt, I didn't choose a city in which to build the temple, I chose a man and it was in the heart of a man "where I built my temple."

Yahweh is more than able to build His temple in the heart of a man, even a Man of War.

David, the man of war, might have been frustrated, because he could not build, but without him tearing down, Solomon, the man of peace, would not have been able to build up.

Do we need to tear down or build?


Thank you Bonnie for sharing this. Sometimes we come across something that speaks truth in such a simple and direct way that just clarifies things - even when it may contrast greatly with our own per-conceived thinking. That's what this article has done for me.

It seemed to me that we had little to choose from this election, the lesser of two evils perhaps, and though I believe God is Sovereign, and the earth is still His and . . . all that is in it; and . . . that the heart of the king is still in the Lord's hand, I still didn't have much hope for the state of our country and way of life regardless of election results.

What I did not see was that 'wrecking ball' image for the status quo government that seems to have become as deeply rooted as any stronghold we could imagine.  Scripture shows many instances throughout God's plan when drastic measures were required to shake humanity loose from such strongholds of thinking and living.  This gives me much to pause and consider, and perhaps adjust my understanding about.  As always, when currently reality bears such a striking resemblance to scripture, it is difficult not to stop and consider.
Thanks Again, Be Blessed.
Phyllis.

Who would have thought we would be seeing such an uproar over an election for the President of the United States?  I cannot help but think, this is a good thing.  I am not endorsing the pettiness of some of the issues, but I am endorsing the renewed interest and passion in the ability we have as citizens of this great Nation to be a part in the election of our leaders. Rise Up American's!

This is one of two posts this week, which I have thought hit the nail on the head.  This one addresses a prophetic look at real meat to chew on and the prospect of a Trump/Cruz Dream Team.  Who could have possibly thought of that?  Rick Joyner.

Rick Joyner: Is Trump the One? 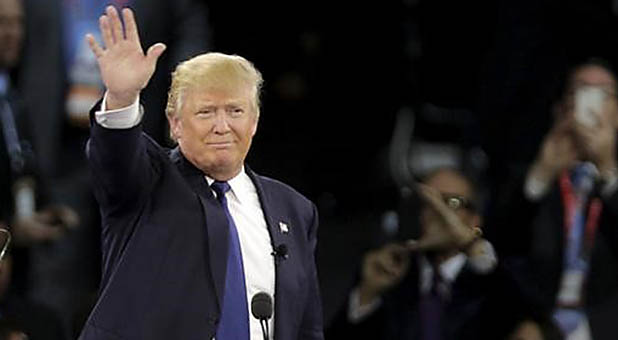 Donald Trump is a polarizing figure for most voters. (Reuters photo)

Rick Joyner is founder and executive director of MorningStar Ministries and Heritage International Ministries. Rick is President of The Oak Initiative, an interdenominational movement that mobilizes Christians to engage in the great issues of our time. He has authored more than 40 books, including The Final Quest Trilogy, There Were Two Trees in the Garden, and A New America. Rick and his wife, Julie, have five children: Anna Jane, Aaryn, Amber, Ben, and Sam.
http://www.FirestormMinistry.com
%%detect_both%%