HAVE YOU RECEIVED ALL YET?   JESUS IS  OUR JUBILEE FOREVER AND EVER

I have seen a lot of words from Christians about the year of Jubilee. Mostly related to a number of years. 25, 50, 100

But the word "Jubilee"  does not particularly have to do with time, but an event or celebration. "Jubilant" means "overjoyed" exultant, triumphant, joyful, rejoicing, exuberant, ecstatic, thrilled, gleeful, enraptured, 'walking on air', seventh heaven. There's a lot of emotions right in those words.

In the Bible, (O.T)  when THE JUBILEE occurred it was referring to a time (fifty years) when there was a law of release put into effect. Slaves were set free, debts forgiven. Lands and property restored.

When the year of Jubilee came, of course, there was great celebration (jubilation),  just like the words above. Think of all those burdens being lifted from our shoulders. Ecstatic is only one word. People who were bowed over suddenly stood straight, Those burdened by debt were released to the debt-free land. It was indeed very good news.

The Bible says that "If He that spared not HIs own Son, but delivered Him up for us all, how then shall He not freely and graciously give us all things." (Rom 8:32)

My friend wrote a beautiful song which says,  "I look after the sparrow, I look after the tree. I water it and feed it constantly, and if I can take care of them, how much more can I take care of you? You're more precious  to me than any other thing you see." Chris Naylor UK) listen here: https://drive.google.com/file/d/1vrm1ilM0RaKe03jAcJl5NDCiHgKi-flP/view

I have even better news for you today. There is something better than the fifty years Jubilee - His name is JESUS. He IS our Jubilee: It's not in time: it's in eternity. It is endless, immeasurable, unending and eternal and immortal.

When we were born We are all debtors to the flesh in that we have our being in this humanity; we are prisoners to it, whether you like it or not. Part of this life is three scores years and ten. Our human frailty which includes sickness, debt, owing, habit, addictions, sorrow are part of life: there is no way to fight the things around us because we don't have any power to do so. We are captive to this earthly life.

We are prisoners in that sense to our own life and environment. And we more or less struggled away having a go at life.

UNTIL by one course or another you suddenly met the Lord Jesus and there was a light that shone into your limited life and, another world began to unroll itself. You met your own personal JUBILEE because Jesus is your Jubilee.

I have even better news for you today. There is something better than the fifty year Jubilee - His name is JESUS. He IS our Jubilee. It is not in time; it's in eternity. It is endless, immeasurable, unending and eternal and immortal.

Remember the things I said about being Jubilant; If you understand what Jesus has done  'THE ULTIMATE  JUBILEE,' you will become jubilant, or overcome by Him.    This Jubilee is supernatural it's not contained under the law as it was in the Old Covenant. It has no limit because the One who set you free is limitless.

His very nature is unrestrained. Heavenly and not earthbound. It's indescribable and full of glory, immeasurable. His power has no boundaries known unto men. God's infinite riches dwell in Jesus, our Jubilee.

The Bible says, "To as many as received Him to them gave he power to become the children of God" (John 1:12)

Many people receive Jesus as a great teacher or even a prophet. Many Christians receive Him as their Saviour and know He saved them from their sins and they will go to heaven. But He is so much more than that. How have you received Him? Have you received Him as your Jubilee?

He saved and released you from EVERY earthly control. Sin, sickness, death, bondage, debts, fear, addiction, lust, destruction. There is nothing that is excluded from this wonderful eternal Jubilee.

This is the question then, "How did you receive Him,?"   Is He your savior and healer?  Is He your deliverer from addiction and lust?  Is He a good man and a prophet? What is He to you? He is all and more. He is the All in All, and we are IN HIM.

All our fountains are in Him. He is our complete source. As the famous hymn-writer says, " Source and fount of every blessing, tune my heart to sing thy praise."  " In Him, we live and move and have our being" (Acts 17:28)

Let me tell you a little more about Him can I?  This is from my book "Jesus the Darling of Heaven"  you should read through it at once a week. This is just a little part of who He is:

"He is our shield, our defender, our rock, our hiding place, He saves us, and keeps by His power, from sin and death.

He is our provider, counselor, great shepherd, our friend.

He is closer than a brother, our love. He is the Husbandman, the keeper of the vineyard. He is the source of all blessing.

He restores, rescues, forgives and redeems.

He is our victor, the captain of hosts, He is our banner, and our standard. Mighty in battle, He is the King of Kings and Lord of Lords.

Jesus is crowned with glory and honor; He is our savior, sanctifier, redeemer, merciful and faithful high priest.

He is the Alpha and Omega, the Beginning and the end, He was dead, but now He is ALIVE forever more and, He is seated at the right hand of God (seated - it’s finished).

He destroyed death and led captivity captive. He is the great Apostle of our faith; He is the supreme sacrifice, the spotless and blameless lamb.

He is our anchor, our strong tower, our shield, our defender, and He was the Ancient of Days before the first day began.

He is the forerunner, the firstborn among many brethren.  He is the surety of a better testament and, He comes from the unchangeable priesthood. He is able to save to the uttermost.

He is the door, the way, and the truth. He is the treasure, the pearl of great price, more precious than the finest gold. He was the rock of ages before any mountain peaks were formed.

He makes His enemies His footstool and laughs at His adversaries.

He came from eternal glory to the depths of humiliation. He abdicated heaven’s throne for a pile of straw in a manger. He sacrificed infinite riches, to embrace poverty, to break its power.

He bade farewell to heaven’s love to receive men’s hatred and shame. He surrendered heaven’s adoration to suffer scorn, and He turned from celestial bliss and life with Cherubim and Seraphim, to die between two thieves on a cross.

He is the tree of life.  He is consecrated forever and makes us sanctified forever, by His precious blood.

He is the minister of the Sanctuary; He is the mediator of a better covenant.

He is the high priest of GOOD THINGS to come, He’s the Lion of Judah, and the Lamb, slain. He is the New and Living Way.

Jesus Is the Darling on heaven. He is the same yesterday, today and forever.
HE IS THE HOLDER OF THE KEYS, HE IS THE AMEN, HE IS THE FINAL WORD.

He is qualified to open the Book; He is the expression of the heart of the Father.

He is our nearest Kinsman and is qualified to redeem us.

He is THE WORD MADE FLESH, the honey in the rock, He is high and lifted up.

He is the lily of the valley the bright and morning star, the fairest of 10,000.

He is more precious than gold; He’s the glory and lifter of our heads. He is the righteous judge. He is a refuge for the oppressed.  He doesn’t forget the cry of the humble.

He bore our sorrows and our grief.
He was despised and rejected of men, and now He controls the destiny of the nations.
The kingdoms of this world are going to become the kingdoms of our Lord and of His Christ, and He shall reign forever and ever.

He is our portion and our inheritance; His garments smell of sweet myrrh and, His breath is as sweet apples. He is a very present help in trouble.
He hides us under the shadow of His wings and keeps us as the apple of His eye.

He is our high tower; He makes the hills to shake, the mountains melt, the heavens bow.

He will light my candle because He is the light of life. He is the branch and the root of Jesse.

HE IS THE GREAT WAVEMAKER FROM GALILEE.

He makes the crooked paths straight and the rough places plain. He split history and divided the ages.

He is the greatest teacher the world has ever known.
He is the Baptizer in the Holy Ghost.
He preserves the faithful; He is the resurrection and life.

He spoke and framed the world. He makes our way perfect and makes our feet like hinds’ feet. He causes us to walk in high places.

Jesus is the Darling of heaven

He is hearing to the deaf and sight to the blind. He is cleansing to the leper, and strength to the weak.
He is comfort to the oppressed, hope to the hopeless and help to the helpless.

He is a brother to the friendless and a friend to the brotherless and He is LIFE to the dead.
He is infinite, eternal, glorious and, full of majesty.

One day in His courts is better than a thousand, wouldn’t you rather be a doorkeeper in His house than dwell in the tents of the world?

He is the covenant keeper, keeping covenant with covenant breakers.
He is sweeter than all the flowers, He is the lover of our soul and the keeper of our hearts.

He is a word to the poet and a song to the worshiper, and music to the ear of every believer

HE IS THE KING OF ALL KINGS AND, ALL RULERS AND EVERY NATION WILL BOW TO HIM.

HIS NAME IS JESUS!
Kathie Walters  (excerpt from my book " Jesus the Darling of Heaven") 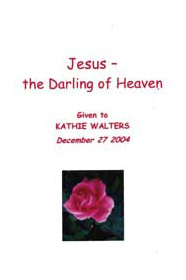